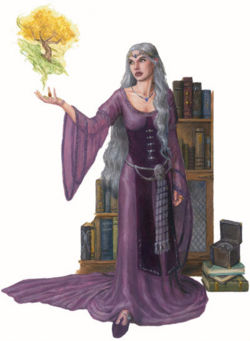 Human female 25th-level mage; one of the Seven Sisters and the Chosen of Mystra

Priest Spells (2): The priest spells (gained while she was a ranger) that she prefers or that she most often finds it necessary to carry are entangle and pass without trace.

Equipment: As the Lady Mage of Waterdeep, Laeral has access to most sorts of mundane equipment.

Magical Items: A partial list of objects she carries or has immediate access to would include an amulet of proof against detection and location, bracers of defense AC2, a ring of animal friendship, a ring of free action, a wand of magic missiles, a wand of paralyzation, and a wand of polymorphing. Her bracers are in the form of silver anklets, ornamented with tiny padlocks that are themselves a type of Quaal.s feather token. These tokens each function at a touch and a command to become a passwall spell.

Combat/Tactics: While it has been quite some time since Laeral was forced to defend herself, she is more than capable of doing so. She prefers to do battle with spells rather than her ranger abilities. In combat, she makes much use of her offensive-capacity magical items, most specifically her wands. Her most potent ability in battle, however, is her unperturbable calmness. Laeral never loses control or allows goads, threats, or taunts to get the better of her.

Allies/Companions: KHELBEN; her Sisters; the Harpers; and the survivors of the Nine, an adventuring group Laeral led in her younger days.

Foes/Enemies: Evil mages who misuse magic, dopplegangers, and all who oppress those weaker than themselves.

Appearance: A slim, 6-foot-tall figure of a woman, Laeral is equally at home in adventuring leathers or long, splendid gowns for an evening at some Waterdhavian noble.s party. Her long, silver hair is complemented by her large, emeraldhued eyes. She often wears a silver circlet (rumored to be magical by some, or a transformed Crown of Horns by others with suspicious hearts) to keep her hair from her lovely face. She does seem innocent of her beauty at most times, often blushing when paid an honest compliment (rather than some sycophantic flattering, which she always sees through). Personality: During her earlier days of adventuring, Laeral was light-hearted, merry, fearless, and a hard drinker. She often went about under a variety of magical disguises, even to the point of impersonating her sisters on occasion. However, since her experience under the sway of the Crown of Horns (see Khelben's entry for more information), Laeral has become more thoughtful and contemplative. Her gentle manner and quiet diplomacy often provide a counterpoint to her consort's sterner approach. Charming by nature, Laeral is an excellent judge of character and (perhaps as a result) is a consummate actress. Troublemakers and those who use deceit as a tool infuriate 'Lady Arunsun,' as she is most often announced at parties and other social gatherings. She believes that all intelligent races should work together rather than waste valuable resources spilling each other.s blood. Laeral herself works to redress those wrongs done with magic misused.

Laeral loves to find, examine, and tune magical-item enchantments. PCs within trekking distance of Waterdeep who have an unknown magical item can do much worse than seeking out Laeral for analysis. Finally, despite all her other attentions, Laeral loves nothing better than helping others. As she is known to say, 'There are no more weighty matters than helping a single being in need'.

History: For general information on how six of the Seven Sisters came to be, see page 136. The text that follows here recounts what happened to Laeral after the death of Elué. Custody of Laeral (and her sisters Dove and Storm) was taken over by Elminster. When her siblings left the Old Mage for other pastures, Laeral stayed on, playing the role of 'little sister' apprentice to the first of Mystra's Chosen before eventually leaving to join the Harpers.

Of the sisters who became involved with Those Who Harp, Laeral was the first to go out on her own. She founded a realm near what is now Luskan. This activity brought her into conflict with her sister Syluné, who sought to hold sway over the same area. Their conflict came to a head when they met on a hilltop for a spell battle that could have destroyed them both. Mystra was left with no option but to appear before them. The goddess explained the sisters. heritage to them and offered them the chance to become two of her Chosen. They gave up their personal concerns, accepted the honor and the challenge of being Chosen, and together traveled the planes for a time thereafter under Azuth's guidance.

After returning to Faerûn, Laeral was active in the North, giving rise to legends of the 'witch,' Laeral. Most folk believe that the modern Laeral took the name of the legendary sorceress, not realizing that 'their' Laeral is that selfsame witch. More recently, Laeral (under a different name) served as the leader of the Nine, an adventuring band that roamed the North. That is, until the vile Crown of Horns turned Laeral to evil and brought death and dissolution to the Nine.

Khelben took Laeral under his wing and restored her sanity, which she had lost while under the Crown.s power. Not long afterward, Laeral became his consort and the chatelaine of Blackstaff Tower. Since that time, she has tutored many prominent wizards of the Sword Coast who served as apprentices in the Tower, and shielded those same apprentices from the worst of Khelben.s blustery moods. Laeral can, as a result, call on the aid of many a potent mage across Faerûn if the need arises.

Motivations/Goals: Laeral works to maintain peace in the City of Splendors and the cities of the Lords. Alliance linked to it and, overall, Faerûn itself. To this end, her current goals include crushing the Zhentarim presence in the North and the Sword Coast, and getting Cormyr to join the Alliance. Laeral also is working to gain friends in Amn, her next target to join the Alliance, to be followed by Westgate and Luskan. Most of Laeral.s concerns are with people, though, not places or politics. She supervises the Tower.s constant flow of apprentices. She also coordinates Harper activity in the city and keeps an eye on happenings in the Underdark, most especially in Undermountain (the vast complex beneath Mount Waterdeep) and its primary city, Skullport.

Campaign Uses: Laeral can be employed in your campaign while engaged in the pursuit of any of the above activities. Prominent among her interests is acting as a sort of liaison between Khelben and the Lords and the city's 'underside'. This reference is both figurative and literal, in that Laeral familiarizes herself with the thieves of the City of Splendors and the illicit deals made among the guilds and noble families seeking to undermine the city. Khelben claims the fact that no thieves. guild has been able to gain a permanent foothold in Waterdeep is due to Laerals efforts. The city of Skullport also gets much of Laerals attention. She often wanders the city in magical disguise, posing as a powerful mage known as Irusyl Eraneth.

Laeral also can come into play when a more sympathetic ear than the one Khelben provides is needed. Indeed, many Waterdhavians benefit from Laerals gentle pursuit of justice (with scrying spells and her own innate sense of character judgment) while avoiding the legal system altogether. Further, Laeral can call on Force Grey (a group of elite warriors and spellcasters in Waterdeep), the Lords, visiting Harpers, and even, on occasion, bands of good adventurers.

Sources: The Seven Sisters, City of Splendors, The Code of the Harpers.

Bonus Spells: In addition to her normal repertoire, Laeral can cast spider climb, invisibility, wraithform, wizard eye, major creation, legend lore, prismatic spray, symbol, Mordenkainens disjunction, and Laerals crowning touch* each once per day without having to memorize them or use any of their components. Laeral has employed the permanency spell on a ring of fire resistance. Although the ring was destroyed in the process, she now enjoys the continuous protection of such a device. She is fascinated by magical items, and has developed the following abilities regarding such objects: A base 70% chance of telling how many enchantments (not charges) an items bears, once she has handled (not activated) the object for a full 3 rounds.

A 60% chance to sense roughly what kind of effect the major or most powerful enchantment is concerned with (the school of magic and an idea of the process).

A 35% chance of discerning any linkages between enchantments. Laeral can tell when activating one power in turn activates another or is governed by a third magic.

A 20% chance of learning something about each of the items secondary enchantments (if any). If the item is of a type shes familiar with, this chance rises to 40%.

If Laeral activates any power of an item while she is able to hold and observe it, her chance of learning about the items other powers increases by 10%. She is also 90% likely to be able to sense all precise details of the power shes activated, including side effects and long-term processes, the number of charges remaining in the item, and so on.

These abilities are linked to another skill that Mystra has granted to Laeral alone: the ability to affect any magical item that she comes into physical contact with. At will, once per turn, Laeral can cause an item to cease to function or to go wild, emitting random, chaotic effects for 1d4+2 rounds. (Consult the Wild Surge Results table in the Tome of Magic or choose random spell effects from the Players Handbook.)